Torn between the Baldface trail and the Ferry crossing beach State Park, we decided to head to the latter. Proximity to water made it an easy decision. A short 2 hour drive from home and we reached the state park around 09:00am.

The trails turned out to be much shorter than anticipated. Covered the whole state park in about an hour. Pretty well maintained. Humid conditions were a great recipe for the bugs though! Having covered the trails we head out to the beach. Pretty calm with just the morning walkers. 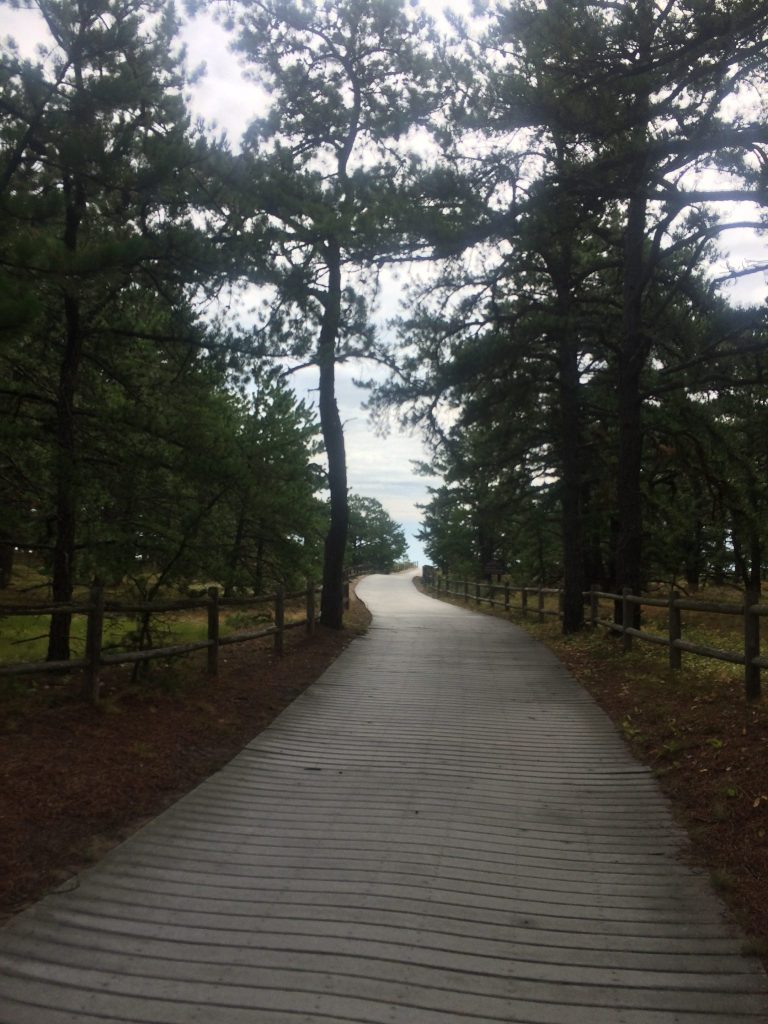 Spent a few minutes here and we decide to head back to the car. Since it was only around 10:30, the restless me offered to drive to the White Mountains to hike the Falling waters trail. Would have  been a splendid choice but for the drive time. We had to head west for about two hours, and then another two hours south to head home. Decided against it and navigated to Green Elephant for lunch. Splendid food, as always!

As we decide to head home, David responds to a text I sent earlier in the day. Checks if we would be interested in a ‘breath session, followed by Sauna and Jacuzzi’ meet. Only he could come up with something like this! We instantaneously take up the offer and decide to meet at the Regency hotel in Portland. With about a couple of hours to kill we decide to head to the East End beach. As we’re walking by the East end promenade, we notice a bunch of kayakers heading to a fort. One look at Miss Me and she understands what’s reeling in my mind. We head to the boat rentals and check if we could rent a kayak. Figuring we didn’t have much time we book a sunset tour at 05:30pm instead. Spend the remaining hour just sitting by the water.

Zoom in and you’d notice this grand old man kayaking in an inflatable. Was a treat to see his wobbly body pivot into the boat, losing and eventually gaining balance. As he slowly head into the waters, the satisfaction of avoiding a flip brimming in his eyes, gets etched into my memory. Freedom.

It’s 14:00 hrs. We decide to head to the hotel to meet David. He’s right in time. Apparently this is his daily regimen. Works out in his Gym and fits this in before he heads back for another workout. We head straight to the Jacuzzi, then the Sauna followed by a cold shower and then repeat it thrice all over. The hot-cold shocks apparently flushes the body and the mind. I’m jealous he gets to do this EVERYDAY! It’s always so inspiring talking to David. Totally one of a kind! A quick stop at a gelato place and we head back to the East end promenade just in time for the Sunset tour. 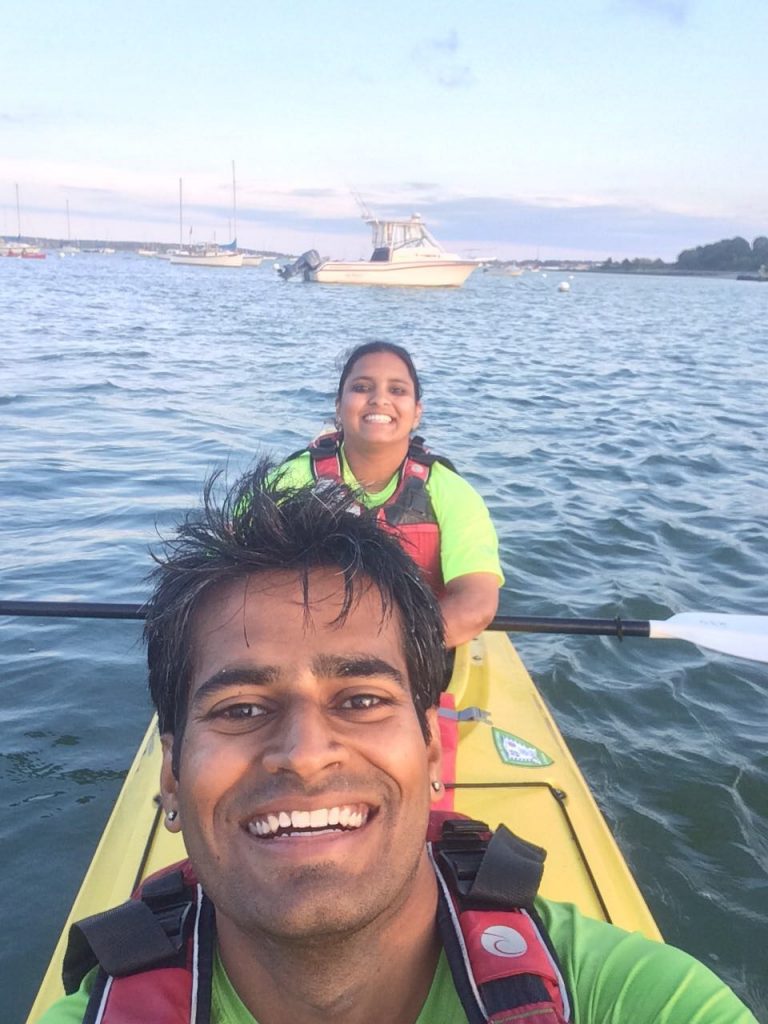 We have a decently big group. Henry, our guide does a wonderful job showing us around. He’s moved all the way from Wyoming for his bachelors in economy and arts. Apparently got into Kayaking a few months back to make some income while he works on setting up an art studio with a few other friends.

Looped around these awesome Osprey nests and head back towards the start point for some sunset views. 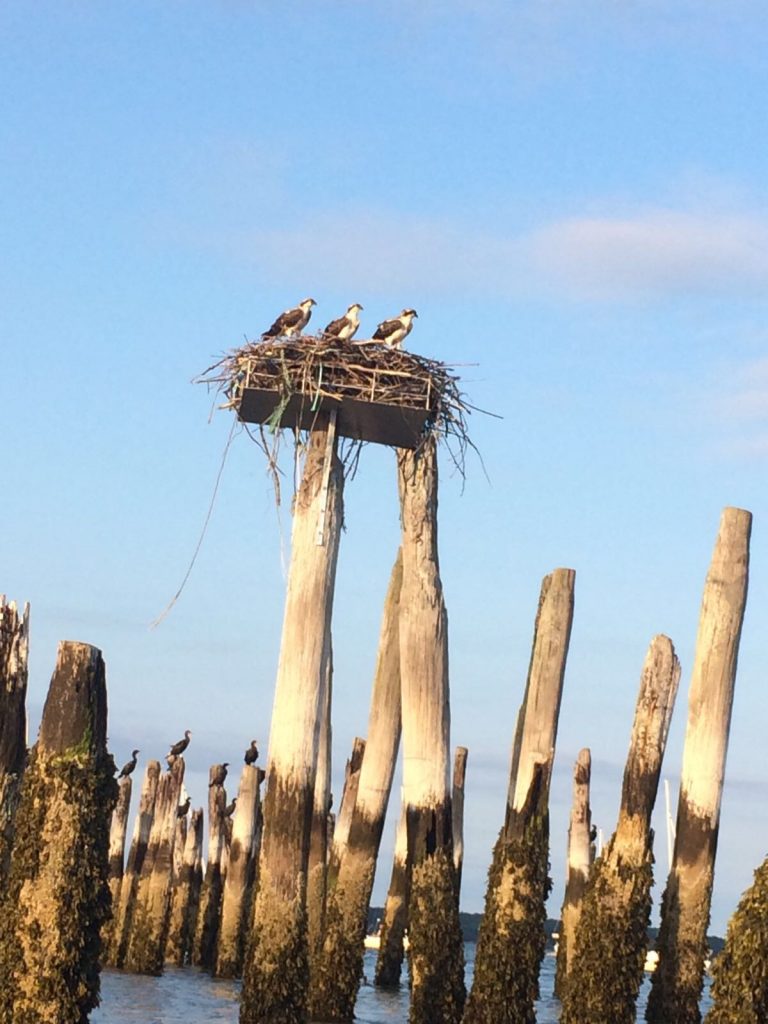 Back on land, Henry suggests we visit Kettle Cove, Mackworth Island and Morse Mountain if we end up in this area some point in time. Given today’s experience, It’s highly likely we will get back here pretty soon. We head back to Portland downtown and decide to dine at Boda, Green Elephant’s sister restaurant. Oh so very Thai and delicious! Two hours down southish and we’re home.

Talk about being impromptu!